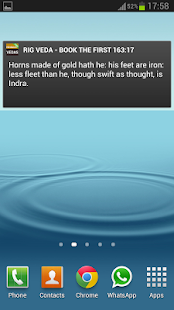 The Vedas (Sanskrit वेदाः véda, "knowledge") are a large body of texts originating in ancient India. Composed in Vedic Sanskrit, the texts constitute the oldest layer of Sanskrit literature and the oldest scriptures of Hinduism.

The Vedas are said to be apauruṣeya ("not of human agency").They are supposed to have been directly revealed, and thus are called śruti ("what is heard"), distinguishing them from other religious texts, which are called smṛti ("what is remembered").

The Vedic texts or śruti are organized around four canonical collections of metrical material known as Saṃhitās, of which the first three are related to the performance of yajna (sacrifice) in historical Vedic religion:

1) The Rigveda, or Rig Veda contain hymns to be recited by the hotar, or presiding priest;

2) The Yajurveda, or Yajur Veda contains the liturgy (mantras) needed to perform the sacrifices of the Veda, and the added Brahmana and Shrautasutra add information on the interpretation and on the details of their performance.

There are two primary versions or Samhitas of the Yajurveda: Shukla (white) and Krishna (black). Both contain the verses necessary for rituals, but the Krishna Yajurveda includes the Brahmana prose discussions mixed within the Samhita, while the Shukla Yajurveda has separately a Brahmana text, the Shatapatha Brahmana.

3) The Sama Veda, Samveda, or Samaveda (Sanskrit: सामवेदः, sāmaveda, from sāman "melody" and veda "knowledge"), is a collection (samhita) of hymns, portions of hymns, and detached verses, all but 75 taken from the Sakala Sakha of the Rigveda, the other 75 belong to the Bashkala Sakha, to be sung, using specifically indicated melodies called Samagana, by Udgatar priests at sacrifices in which the juice of the Soma plant, clarified and mixed with milk and other ingredients, is offered in libation to various deities.

4) The fourth is the Atharvaveda, a collection of spells and incantations, apotropaic charms and speculative hymns.

The individual verses contained in these compilations are known as mantras. Some selected vedic mantras are still recited at prayers, religious functions and other auspicious occasions in contemporary Hinduism.

The various Indian philosophies and sects have taken differing positions on the vedas. Schools of Indian philosophy which cite the vedas as their scriptural authority are classified as "orthodox" (āstika).

Have the Vedas read to you! Just go to the reading section and click on the Audio button, which is next to the font change button. (Beware though it can get quite loud, so do tune the volume)

When you open the app, you will see Vedas Verse of Day, and Vedas Book of the Day. Start your day with a Daily Vedas Verse or Browse the Book of Day.

Study the Vedas with our easy to use interface. Browse by books, chapters, verse. Highlight your favorite Vedas verses and easily access them in future.

Use the favorites feature to save or bookmark your Vedas study. Use the highlight feature to make highlights in different colors.

Change the font settings directly when reading the Vedas.

Most important of all, its FREE.

With Samsung Notes, you can create notes containing texts, images with footnotes, voice recordings, and music. Moreover, you can share your notes easily to SNS.Previously made any memos from S Note and Memo also can be imported into Samsung Notes.Samsung Notes provides var...

Are you ready to experience your inner rebel? Ever wonder what it is like to get a tattoo? Now you can experience it all without feeling the pain! Fill in hundreds of different tats for your customers. Try to get the picture as close as possible for them and don’t mess up!. Get ready to feel t...

Control the assassin and hunt down your targets one by one. Use your surroundings and shadows to stay hidden from flashlights. Targets with automatic machine guns can be lurking around each corner. Attack them swiftly and escape without being spotted. Each eliminated target drops...

From Dplay app, you can enjoy a wide range of genres from adventure, car/motorcycle, universe/nature, to animals for free. Enjoy our contents for free anytime from your computer, cellphones, tablets, and Android TVs.• Watch your favorite program whenever you want Dplay• Watch all...