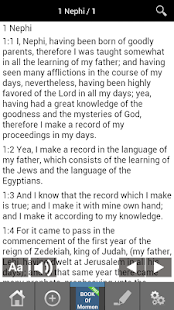 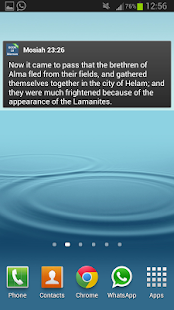 The Book of Mormon is a sacred text of the Church of the Latter Day Saint movement, which adherents believe contains writings of ancient prophets who lived on the American continent from approximately 2200 BC to AD 421.

It was first published in March 1830 by Joseph Smith as The Book of Mormon: An Account Written by the Hand of Mormon upon Plates Taken from the Plates of Nephi.

According to Smith's account, and also according to the book's narrative, the Book of Mormon was originally written in otherwise unknown characters referred to as "reformed Egyptian" engraved on golden plates.

Smith claimed that the last prophet to contribute to the book, a man named Moroni, buried it in a hill in present-day New York and then returned to earth in 1827 as an angel, revealing the location of the book to Smith and instructing him to translate it as evidence of the restoration of Christ's true church in the latter days.

The Book of Mormon has a number of original and distinctive doctrinal discussions on subjects such as the fall of Adam and Eve, the nature of the Atonement, eschatology, redemption from physical and spiritual death, and the organization of the latter-day church. The pivotal event of the book is an appearance of Jesus Christ to the Americas shortly after his resurrection.

The Book of Mormon is the earliest of the unique writings of the Latter Day Saint movement, the denominations of which typically regard the text not only as scripture but also as a historical record of God's dealings with the ancient inhabitants of the Americas.

The Book of Mormon is divided into smaller books, titled after the individuals named as primary authors and, in most versions, divided into chapters and verses. It is written in English, very similar to the Early Modern English linguistic style of the King James Version of the Bible, and has since been fully or partially translated into 108 languages.

The Church of Jesus Christ of Latter-day Saints (the LDS Church or, informally, the Mormon Church) is a Christian primitivist church that considers itself to be a restoration of the church founded by Jesus Christ.

Adherents, sometimes referred to as Latter-day Saints or, more informally, Mormons, view faith in Jesus Christ and his atonement as the central tenet of their religion.

Contains all Books from the Book of Mormon:

The Testimony Of Three Witnesses

The Testimony Of Eight Witnesses

The Book of Mormon

This is The Book of Mormon, An Account Written by the Hand of Mormon Upon Plates Taken from the Plates of Nephi. As said in the title page of the 1908 RLDS Book of Mormon, the text contained in this Android App is faithful copy from the original translation by Joseph Smith Jr. This holy docume...

Now includes English, Spanish, and Portuguese. Because of the increased attacks on the family there is a growing need for families across the world to have a firm foundation in Christ. We created this study guide to assist individuals in their daily scripture study and help families hav...

A collection of podcasts and audio streams selected to cover a variety of interests for members of The Church of Jesus Christ of Latter-day Saints (Mormons).Listen to the scriptures, church magazines and manuals, General Conference, devotionals, hymns and other uplifting music, and fait...

The Bible and Book of Mormon

The Church of Jesus Christ, headquartered in Monongahela, PA, presents the Bible and the Book of Mormon in a single mobile app. This is only app having the two scripture volumes together, thus fulfilling Ezekiel 37:17 where the Lord declares that he will take the stick (book) of Judah and the ...